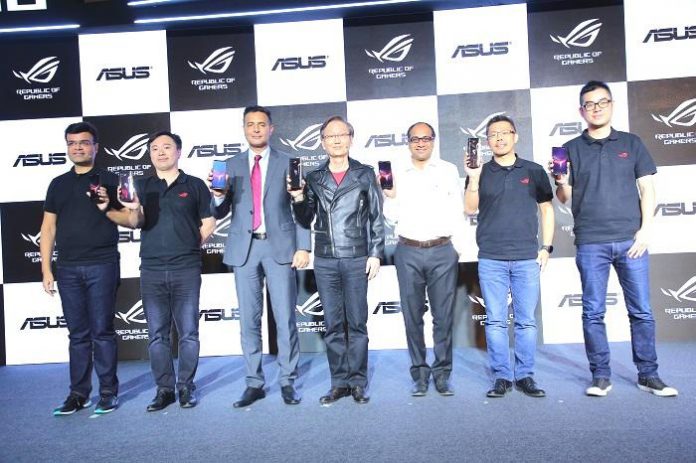 ROG Phone II builds on the innovative gamer-centric design of the first-generation ROG Phone, and takes performance to an epic new level with the world’s first announced implementation of the Qualcomm® Snapdragon™ 855 Plus Mobile Platform, which is clocked at up to 2.96GHz.

Graphics are provided by the new and enhanced Qualcomm® Adreno™ 640 GPU for pro-level gaming experiences and the uprated GameCool II multi-level cooling system with a large 3D vapor-chamber sustains full-speed performance for even longer.

“ROG was created for those who dared to be different. It is devotion for those who thrive on the thrill of performance and the exciting journey to victory,” said ASUS Chairman, Jonney Shih. “Today, we are thrilled to bring the greatest gaming phone ever— the ROG Phone II to India. It is worshipped by gamers and loved by tech gurus. Inspired by recognition from international media, influencers and consumers from around the world, we strive to push innovation further beyond its limitation.”

Aditya Soni, Senior Director, Flipkart Mobiles said, “Flipkart will continue to grow the gaming smartphone segment which is a new interest area for our customers. Through this new launch, Flipkart and ASUS ROG Phone II will cater to the gaming and flagship premium phone needs of the consumer. Flipkart’s rich customer base and ASUS ROG Phone II’s innovative approach to mobile gaming will result in expanding this growing market.”

“Snapdragon 855 Plus is one of the most advanced mobile platforms commercially available, supporting cutting-edge cellular performance, coverage and battery life,” said Rajen Vagadia, Vice President and President Qualcomm India Pvt. Ltd. “With Snapdragon 855 Plus Mobile Platform, we aim to elevate gaming experiences for our users. We are excited to bring Snapdragon Elite gaming features to the Asus ROG Phone II and look forward to continuing to working with Asus in delivering powerful flagship devices to consumers, globally and in India.”

Commenting on the establish partnership, Nitin Goel, Country Manager, Indian Sub-continent, Gameloft said, “We are extremely delighted about the continued partnership with ASUS to bring enhanced and customized capabilities along with exclusive content on most popular arcade racing title, Asphalt 9, specially to the users of ROG Phone II. Together with the newest technology we are thrilled to deliver an unparalleled gaming experience for the larger gaming community”

ROG Phone II delivers dominating performance in every arena, with no compromises. It’s the world’s first flagship smartphone to be powered by the new Snapdragon 855 Plus Mobile Platform, with the Qualcomm® Kryo™ 485 CPU clocked at up to 2.96GHz and teamed with up to 12GB LPDDR4X RAM for effortless gaming power. The special Adreno 640 GPU — 15% faster than the current Snapdragon 855 — offers faster display throughput and greater power efficiency, making ROG Phone II a graphics powerhouse that’s unfazed by today’s demanding visuals. The Snapdragon 855 Plus comes fully integrated with Qualcomm® Snapdragon Elite Gaming™, which provides gamers with a full arsenal of competitive features that are optimized for gaming.

To ensure maximum sustained performance, the second-generation GameCool II cooling system in ROG Phone II has a newly designed 3D vapor chamber that’s even more effective at removing heat from the phone. There’s also a new AeroActive Cooler II accessory featuring redesigned fan blades that deliver even more airflow into the ROG Aerodynamic System, and which can fit over the bundled ROG Phone Aero Case. The AeroActive Cooler II is now whisper-quiet, with a 24dBA noise level — 4X quieter than the original design.

The massive 6000mAh battery in ROG Phone II provides non-stop gaming and usage power anywhere. ROG HyperCharge direct-charging technology — which takes the charging circuitry out of the phone and puts it in the special 30W charger — gives ROG Phone II shorter, safer charge times (up to 66% charged in just 58 minutes). Support for PD charging means users can easily charge their phone with any USB Type-C™ (USB-C™) charger, or conveniently charge other devices with reverse charging functionality of their ROG Phone II.

ROG Phone II is engineered for victory from the ground up, with its pioneering landscape-oriented ergonomic design. Uprated AirTrigger II technology provides extra-precise ultrasonic touch controls with a vibration latency of just 20ms, and the Dual Surrounding Vibration technology creates a powerful 3D force-feedback experience. The unique side-mounted USB-C™ charging port and lets users keep their phone topped up without cramping their style during marathon sessions. And it doesn’t end there: the dual front-facing speakers are positioned at top and bottom of the phone for perfect stereo imaging in landscape mode, while the groundbreaking multi-antenna Wi-Fi is designed to deliver maximum landscape-mode performance.

The ROG Phone II sports a well-known SONY IMX586 flagship sensor with Quad Bayer technology, and with an aperture of F1.79 and with an effective pixel size of 1.6µm. This allows for a great flagship camera that works equally superb in both day-light and in low-light scenarios. The secondary camera is a 13MP ultra-wide camera with 125º FOV, that allows for impressive wide-angle shots of your world with great detail. It offers enhanced camera features like HDR+ Enhanced, and Super Night mode that capture the very best images with superb dynamic range and light composition. Main camera also supports Slo-mo up to 480fps, Panorama, and Pro Mode with up to 48MP.

On the front is a high-resolution 24MP camera with Quad Bayer technology for low light scenarios, and an aperture of F2.0 and an effective pixel size of 1.8µm that allows it to capture superb selfies. With gaming in-mind, the camera is strategically positioned to enable high-quality video streaming while gaming.

Both the front and the back cameras support EIS, ensuring great high-quality blur-free videos.

ASUS Republic of Gamers (ROG) announced partnerships with world-class game developers Blazing Games Inc., Capcom®, Gameloft, and MADFINGER Games at IFA, 2019. Benefits will include exclusive in-game content for ROG Phone and ROG Phone II, and the optimization of games to take advantage of the unique capabilities of ROG Phone II and its hardware ecosystem.

How Orange is reducing energy consumption across Europe