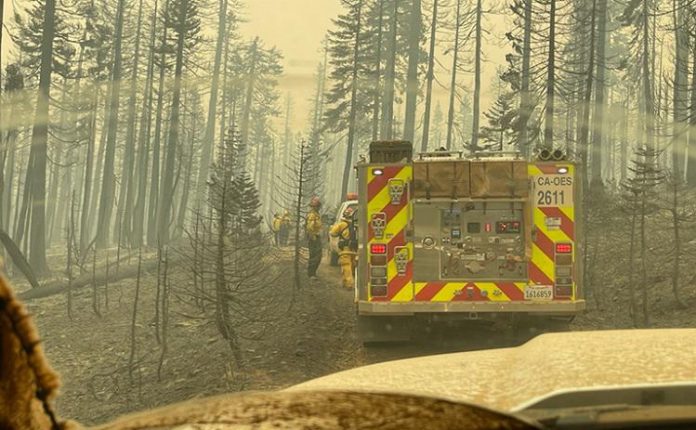 Starting on July 13th, the Dixie Fire has already become the 2nd largest fire in California history and the largest active fire in the United States, covering more than 670,000 acres across Butte, Lassen, Plumas and Tehama counties and displacing thousands of people.

FirstNet®, Built with AT&T, is delivering connectivity for the first responders our communities count on the most. We’ve deployed dedicated FirstNet portable network assets (SatCOLTs) to provide the always-on priority communications public safety requires. FirstNet SatCOLTs facilitate a higher level of safety on the ground by providing dedicated connectivity, improved situational awareness via applications, near real-time footage and communications.

“FirstNet was critical for the Incident Communications out on the Dixie Fire,” said Tim Maguire, Fire Captain at Santa Clara County Fire Department. “When the cell towers went down due to the fiber backhaul being burned, FirstNet came in with their deployable upon our request. This enabled the Incident Command Team and Base Camp the critical communications for voice and data we needed.”

FirstNet aims to help these first responders with support that goes beyond a mobile connection. We have deployed a FirstNet ROG the Dog onsite to provide animal-assisted therapy to first responders struggling with mental health challenges in this stressful situation. With a fleet of more than 30 trained labradoodles across the country, who specialize in first responder therapy, these canines answer the call to serve the public safety community on the front lines.

Responding to more than 50 wildfire related requests for deployables and communications-support this year, the FirstNet team at AT&T is also helping firefighters and other crew members in locations across the country, who are working to mitigate the impact of the disasters. Only FirstNet has dedicated assets at no additional charge to provide fire, EMS, law enforcement and more with reliable connectivity when and where they need it, including in the immediate aftermath of a wildfire or other disaster when commercial power and other infrastructure may be disrupted.

With FirstNet, we make public safety’s mission the priority. And we’ll continue to stand by the men and women who put their lives on the line, day in and day out, to protect and support our communities. Go here for more on FirstNet and how it supports America’s first responders – no matter the emergency.