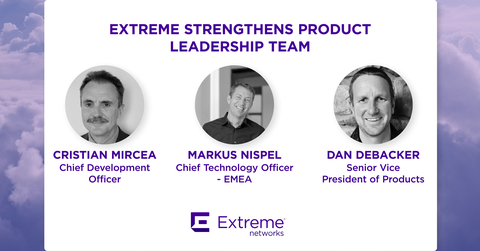 As Chief Development Officer, Mircea will oversee Extreme’s engineering organization, where he’ll leverage his experience driving operational efficiency and continue to build on Extreme’s highly successful universal platform strategy. He has deep experience leading wired and wireless network product strategy, product solution design and development and portfolio intelligence. Mircea has been with Extreme since 2013, joining via the company’s acquisition of Enterasys Networks.

In his role as CTO for EMEA, Nispel will be responsible for driving the company’s product strategy and market execution to align to the needs of customers and partners in the region. Most recently, he served as vice president of international markets at Extreme, where he established the Office of the CTO’s incubator, developing and delivering new products to market. He has a proven track record of intrapreneurship and innovation within Extreme and established several key data analytics patents. Nispel joined Extreme in 2013 via the company’s acquisition of Enterasys Networks.

As Senior Vice President of Products, DeBacker will drive product management strategy for the company. Most recently, he served as vice president of service provider product management and engineering, where he established relationships with some of the world’s largest carriers, including Verizon. DeBacker was also instrumental in overseeing Extreme’s development and go-to-market strategy for Extreme Fabric Automation. DeBacker joined Extreme as part of the company’s acquisition of Brocade in 2017.

Nabil Bukhari, Chief Technology Officer and Chief Product Officer, Extreme Networks, commented, “As we take the next step in our evolution as a leader in cloud networking, it’s both critical and opportunistic to establish new pillars of leadership across our organization. Cristian, Markus and Dan are not only experts, but they’ve established themselves as passionate, motivated and seasoned strategists that can execute to plan every time. Their institutional and industry knowledge gives me confidence that they’ll have immediate impact in these new roles. At Extreme, we’re proud that we’re able to promote key leaders from within and provide the opportunity to continue to advance their careers, and I am certain we will feel the positive impact of their efforts for many years to come.”