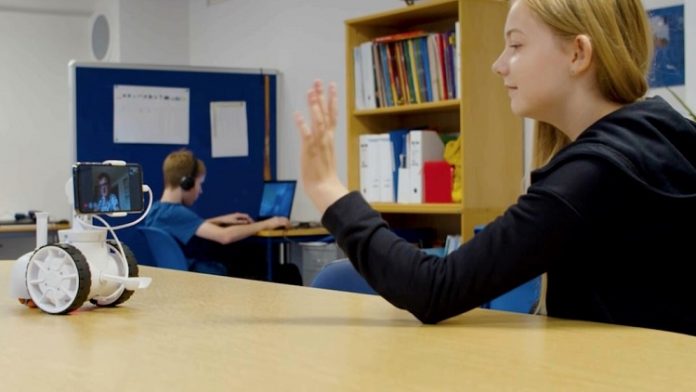 TDC Net, Danish robotics company Shape Robotics and Ericsson have powered an innovative 5G robot connectivity trial in Denmark that has enabled a teenage student to join his classmates in real time, inside and outside the classroom, during the school day despite having a medical condition which prevents him from physically attending school.

Rasmus Dalsten (13), from Herlev in Denmark, experiences a full day in the presence of his peers via a tablet with a live video connection from a 5G smartphone mounted on a fully mobile robot in the school premises.

The extremely low latency, fast speed and high data-handling capabilities of 5G mean that Rasmus, who is unable to physically attend school because of a lung condition, not only doesn’t miss out on classroom or schoolyard activity, but has the freedom to move and look where he wants.

Rasmus had a previous robot that was controlled by teachers and classmates at school. If he wanted to change the view of what he was seeing, someone at school had to physically turn the robot in that direction.

With 5G, Rasmus has full control of the robot, called Fable, which is about the size of a small teddy bear. Wherever he wants to go, and whoever he wants to make contact with at school, he controls Fable to become his real-time eyes and ears.

He can react to classroom lessons as they happen by steering Fable himself. If someone behind Fable makes a comment as part of a discussion, Rasmus can maneuver Fable to see who is speaking, and even join in.

Rasmus says: “I’ve got a new robot that I can turn around myself and it’s no trouble for the adults or myself. It is very nice.”

Rasmus’s mother, Charlotte Dalsten, is impressed that Fable, which Rasmus has trialed for six months, allows him to make instant eye contact with his classmates.

“Rasmus logs onto the PC and the iPad, which is connected to the robot,” she says. “This way he gets to be with his school class all day, during lunch breaks and in class. It has been important for me to see that Rasmus is happy when he logs on, that the others interact with him and that he is able to look around and make eye contact with them.”

Rasmus’s teacher, Cille, says the 5G-powered robot enables Rasmus to take part in lessons on a par with other classmates who are physically in the room.

“It is not me who decides if he looks at the blackboard or if he looks at those in the classroom who are speaking,” she says. “He decides where to look and where to go. That’s what he would do if he was here physically. So that has clearly been the biggest benefit.”

Ericsson, TDC Net and Shape Robotics say the trial has proved the potential of 5G-enabled mobile robotic connectivity use across a host of use cases spanning domestic, workplace and industrial applications.

Moises Pacheco, CTO and Co-Founder, Shape Robotics, says: “Thanks to the collaboration with TDC NET and Ericsson, we have been able to show the potential in combining 5G technology with robots in an educational setting. Although Fable also works with 4G, in practice, it is a different robot when using 5G. With 5G, students experience lightning-fast sound and image, so they can participate on the same terms as other students.”

Toke Binzer, Vice President, Technology, Strategy and Economics, TDC NET, says: “It is roughly a year since we initiated the launch of the first nationwide 5G network in Denmark. Since then, we have seen increased interest in using the technology to deliver value within many different sectors.Robots connected to the 5G-network can, unlike other robots, both send and receive large amounts of data without delays, while at the same time being able to be controlled remotely. And if we take a step back from the educational sector it becomes clear that the learnings from this project can be transferred to other areas such healthcare, social care and working remotely across industries.”

Niclas Backlund, Head of Ericsson Denmark, says: “Denmark was one of the first countries in the world to roll out a nationwide 5G network. I am convinced that the Danish robot example, together with the other initiatives we have implemented with the 5G Innovation Hub, can inspire companies beyond our borders. 5G proves to be a fruitful innovation platform for new use cases. This remote school application really shows the power of digitalization to address societal needs and is an excellent example of digital inclusion.”