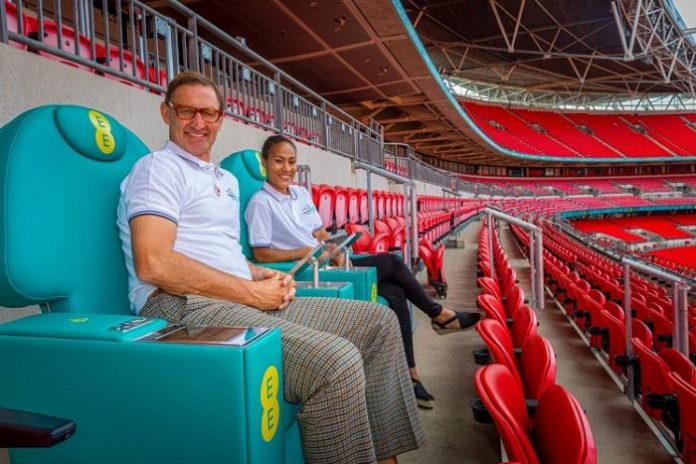 Each of the four innovative new stadium seats includes extra leg room and features two tablets to stream the action live from the players’ tunnel over 5G and order complimentary snacks direct to their seat.

Football fans can enter for a chance to watch the FA Community Shield from the best seats in the house at wembley.ee.co.uk/comp/best-seats-in-the-house.

Working to make Wembley the most connected stadium in the world, EE is offering four lucky football fans the opportunity to watch their favourite teams from the comfort of brand-new stadium seating. With tablets installed for the lucky occupants to order superfast snacks direct to the seats, and charging points to keep phones powered, fans won’t miss a second of the action. Lucky winners will also be able to access an exclusive behind-the-scenes 5G powered live stream direct from the players’ tunnel.

Former England captain Tony Adams and former footballer Rachel Yankey were the first to try out EE’s best seats in the house. The England legends gave the luxury seating their seal of approval, testing the extra leg room as well as ordering burgers with a single swipe from the tablets’ food delivery service.

The first opportunity to win one of the best seats in the house launches today for a chance to attend the FA Community Shield match on Sunday 4th August 2019, where Liverpool will play Manchester City in an epic showdown at Wembley Stadium connected by EE. Fans will then be in with a chance of scoring the best seats in the house at every FA and England fixture throughout the remainder of the year and into 2020.

Fans will also be able to win the best seats in the house for other upcoming matches at Wembley, including England v Bulgaria (mens), England v Montenegro (mens) and England v Germany (womens) on EE’s social channels. Lucky winners will be able to decide which side of the stadium they’d like to be sat to ensure they’re watching the game with their fellow supporters.

Rachel Yankey, former footballer, comments: “All football fans know how frustrating it is to miss the deciding moments of a big game while waiting in a queue for food or drinks. With EE’s best seats in the house, fans will be able to enjoy all the extras without compromising on a second of game time.”

Pete Jeavons, Marketing Communications Director at BT and EE said: “When designing this unique set of stadium seating, we looked at how we could use the power of our technology to make football fans’ experiences even better at Wembley Stadium. Our 5G powered live stream of the players’ tunnel uses our new superfast network to give our customers exclusive pre-match content, and being able to order snacks with a single swipe means the lucky winners will be fed and watered without missing a second of the match.”

EE is the lead partner of Wembley Stadium – working to make Wembley the most connected stadium in the world. Since the partnership kicked off in 2014, EE has introduced many technological advancements to the stadium including delivering a significant network upgrade to more than double 3G and 4G capacity, and now 5G connectivity, ensuring fans can stay connected during events, as well as working with the Wembley team to deliver the first official Wembley app.