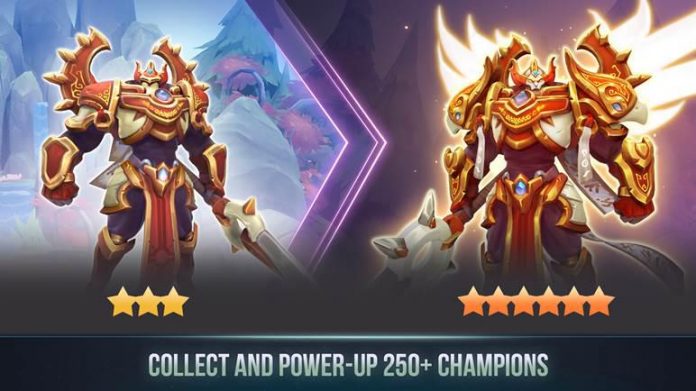 Gameloft, leader in the development and publishing of mobile games, is thrilled to announce the release of the new Dungeon Hunter Champions on the App Store, Google Play and Windows Store.

Become a powerful Invoker and summon Champions from every corner of the multiverse, embarking on an intense party-based single-player campaign enriched by a captivating story written by veteran fantasy and sci-fi author Dan Abnett.

Discover the Dungeon Hunter Champions Multiverse with the launch trailer, screenshots and artworks are available here.

All the missions come with different challenges, enemies, and environments where you can explore all the power of your party of Champions. Master your Invoker abilities by mixing and matching champions to build the strongest team in the Multiverse.

A multiplayer experience, including a live 5v5 mode, compliments the solo campaign and its lore, allowing your best champions to fight in real time with other players, in maps specifically designed to host exciting battles. Build a strong strategy and skillfully use your champions to lead your team to victory.

As a part of the departure from the classic hack’n’slash series, Dungeon Hunter Champions features new worlds and characters, with themes beyond the classic Dungeon Hunter. From a steam punk world to futuristic universes all the new settings give the champions unique personalities and skills. The roster of champions has a play style for everyone, no matter which dimension they’re from!

“This has really been a drive to create new experiences within the Dungeon Hunter franchise,” says Nitin Goel, Country Manager, Indian-subcontinent at Gameloft. “Dungeon Hunter Champions builds on the successful features of the previous games, now totaling 100 million downloads, combing new game modes and mechanics with original ideas like the immense Multiverse. Dungeon Hunter Champions is about creating a new social gaming experience for players.”

Whether it’s through the overarching story or an entirely multiplayer mode, Dungeon Hunter Champions makes a name for itself by adding lots of exclusive features. Players will be able to experience this fresh new take from the menu itself converted into an interactive social hub, allowing players to communicate with each other, take on new missions, and see the top players on the leaderboards.

Download Dungeon Hunter Champions on the App Store, Google Play, and the Windows Store. More information can be found on the official website: https://dungeonhunter-champions.com/