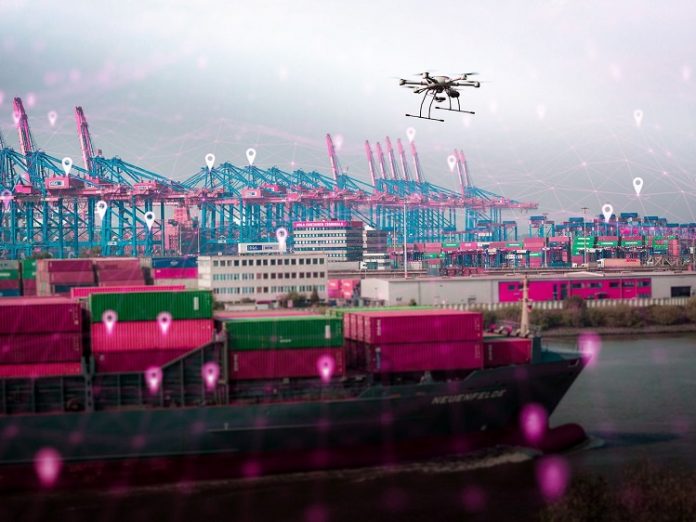 Together with HHLA Sky, a subsidiary of Hamburger Hafen und Logistik AG, Telekom is implementing a campus network in the Port of Hamburg. HHLA Sky uses this to control and monitor a fleet of industrial drones from a single control center.

At HHLA’s terminals, the flying robots inspect container gantry cranes and asphalt surfaces to increase safety on the port site. This saves time compared to previous inspection procedures. In addition, the drones reliably transmit sensor and flight data via the campus network.

“At the Port of Hamburg, we are demonstrating how well Internet-of-Things solutions harmonize with the most advanced logistics. In HHLA Sky we have found a partner with whom we are jointly developing our product. Smooth logistics are of particular importance right now. With our innovations, we are making an important contribution to this,” says Hagen Rickmann. He is responsible for business customers at Telekom Deutschland GmbH.

With the joint project, the partners are pursuing the goal of learning more about the special requirements of automated flying robots for mobile communications. The drones climb to heights of up to 100 meters. In doing so, they sometimes cover long distances. As part of a development partnership, a technical team wants to conduct research at a second HHLA Sky site in North Rhine-Westphalia. For this purpose, Telekom has expanded the campus network in Hamburg to include this additional site.

The industrial drones are automated on the move. They fly through several container terminals in the Port of Hamburg. HHLA Sky uses them for various applications. These include, above all, inspection flights, which replace time-consuming tours, deployments of industrial climbers and in consequence long waiting times.

The flight area covers more than three square kilometers. It is crisscrossed by several waterways, wind turbines and a motorway bridge.

“With the campus network, we can control almost any number of drones even more safely through a sensitive area. In addition, together with Telekom we can develop the entire system, i.e. drone and control center, much faster,” says Matthias Gronstedt, Managing Director HHLA Sky. “Controlling a fleet of industrial drones is demanding. For this we need: continuous network coverage, high availability, guaranteed bandwidth, and low latency. The campus network, soon with 5G, forms the basis for this.”

The drones currently transmit all data packets with LTE. The new mobile communications standard 5G offers even more advantages in the future. For example, greater bandwidths and higher network capacity. This requires space-saving radio modules for the drones. Telekom is working on developing these components.

Drones fly out of sight

With the help of the drones, the technicians assess the condition of cranes, loading machines and traffic areas. This is done from a distance. During the flight, the drones therefore need a constant, encrypted data connection. For example, they transmit a live video image in HD quality. In addition, drones and the control center exchange control signals. HHLA Sky thus monitors all the drones’ movements simultaneously and centrally.

For a safe flight, it is necessary that the control center always tracks the device status of the drones. This applies to temperature, charging status or motor data. This results in a special requirement: the network technology must be very reliable for flight operations beyond the pilot’s line of sight.

HHLA Sky offers a platform for the fleet operation of unmanned aerial systems. The company can control up to 100 drones from a single control center. HHLA Sky also uses its drones itself to monitor special infrastructure.

The aircraft are also used in intra-logistics. They use additional sensors for this. For example, infrared cameras for thermal analyses. The drones are also suitable for transporting small packages or urgent documents.

HHLA Sky is a subsidiary of Hamburger Hafen und Logistik AG, HHLA. HHLA operates three container terminals and other handling facilities in Hamburg. Hamburg has the third largest container port in Europe. It is considered one of the most important hubs for freight transport.