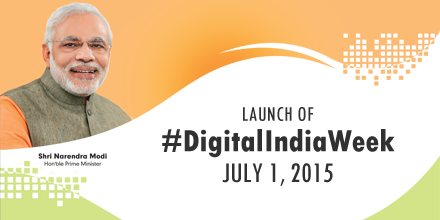 While speaking at the grand opening of ‘Digital India Week’ – the Prime Minister of India, Narendra Modi, has described cyber-related risks as a global threat of “bloodless war,” and called upon India’s IT community to serve the entire world by building credible cyber-security systems.

With globally revered organisations such as Infosys, TCS and Wipro coming from India’s turf, the country can potentially play a critical role towards eradicating cyber-threats on global digital highways and networks.

The Prime Minister also exhorted the captains of India’s IT industry to boost production of electronic devices and goods in the country, as part of the “Make in India” initiative, to reduce dependence on imports. 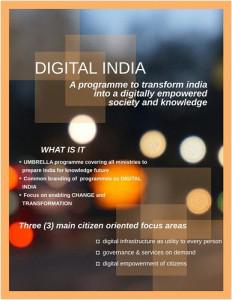 The Prime Minister noted that today, it was not enough for India to say that it is an ancient civilization, and a country of 125 crore with favorable demography. He said modern technology needs to be blended with these strengths.

The Prime Minister reiterated his Government’s resolve to not allow the Digital Divide to become a barrier between people. He outlined his vision of e-governance and mobile governance, where all important Government services are available on the mobile phone.

The Prime Minister said that earlier, India was criticized for launching satellites, but now it was recognized that these satellites help the common man, for instance, farmers through accurate weather forecasting. Similarly, the Prime Minister said, the Digital India initiative was aimed at improving the lives of the common man. He said that India may have missed the Industrial Revolution, but will not miss the IT revolution.

The Prime Minister assured full support to young entrepreneurs who wished to launch Start-ups. He called upon the youth to innovate and said “Design in India” is as important as “Make in India.”

Speaking about the various initiatives part of Digital India campaign as well as the ongoing smart cities project – Koichiro Koide, MD, NEC India said, “We, at NEC India Pvt. Ltd, welcome the launch of PM Modi’s Smart Cities Mission guidelines and the three flagship urban development schemes as it is a great step towards making urbanization as one of the most critical drivers of growth in today’s scenario. We can confidently say that planning a smart city always begins with taking into account the requirements and resources of the city in question, something that cannot be standardised in technical terms. What is commendable is that the three schemes together not only focus on developing 100 smart cities across different states but also commit to readying a few hundred more to become smart cities in the next phase, while making them better immediately for its citizens with better housing and urban transformation. This practical approach clearly indicates the intent of the government of an all-round development for all regions in the country. With this step taken, the launch of the guidelines will help channelizing the resources, funds, expertise in the right direction and will act as a trigger in propelling the development of smart cities mission in India. We will continue to contribute to Indian smart cities mission creating “Solutions for Society,” and our reinvention as a “social value innovator”.

Talking about the Digital India initiative and the launch of Digital India Week, Dr. Chandan Chowdhury, Managing Director-India, Dassault Systems said, “The Digital India Initiative is a welcome move by the government to take India closer to becoming a digitally empowered society and a more robust knowledge economy. The initiative will facilitate greater inclusiveness and connectivity of individuals with relevant information and resources for their benefit. Projects such as Digital Locker System, Swachh Bharat Mission (SBM) Mobile app, MyGov.in are all efforts towards bridging the digital gap in our country. Today, we thrive in the age of consumer experience, and digital India initiative through various programmes is focusing on offering a high end experience. The initiative will enable  people to get engaged in the  innovation process-it’s the next level of growth which the economy will need to move to.”