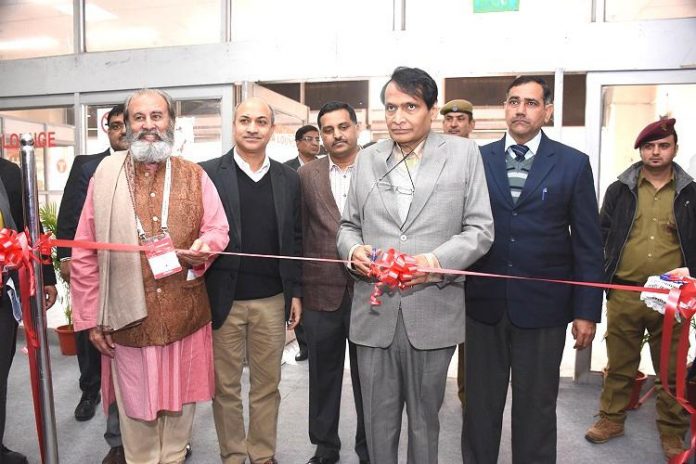 The 27th edition of Convergence India 2019, the 3rd Internet of Things India 2019 and EmbeddedTech India 2019 expos, was inaugurated by Suresh Prabhu, Hon’ble Minister, Ministry of Commerce & Industry and Civil Aviation, Government of India, at the Pragati Maidan, New Delhi.

Speaking during the special address at the inaugural ceremony, Suresh Prabhu, Hon’ble Minister, Ministry of Commerce & Industry and Civil Aviation, Government of India said, “This event is a true convergence of technologies and companies from around the world coming together to build a new global technology-driven ecosystem. I believe India has a very important role to play in this new world, not only as a nation capable of adopting new technologies, but also one capable of innovating and producing new technologies. We have many companies in the country that have already made a mark in their respective domains, and they now have the opportunity to work together on building holistic solutions needed for the future we are heading towards. I would like to congratulate Prem Behl for organising this event on such a scale and I look forward to its continued growth in the years to come.”

Delivering his Welcome Speech, Prem Behl, Chairman, Exhibitions India Group, said “With an annual GDP growth rate of 7.4 per cent, India is already the world’s sixth-largest economy and poised to become the fourth-largest consumer market behind the US, China and Japan. Consumer spending is expected to grow from $1.5 trillion to around $6 trillion by 2030. Much of this progress in terms of GDP and consumer buying has happened in the last five years or so.”

Behl added that e-commerce has emerged as the face of new India. With the Indian e-commerce market expected to grow into triple digits to $200 billion by 2026, one of the greatest impacts will be felt by the micro, small & medium enterprises (MSME). Another positive impact of this has been the rise in start-up sector. “Today, many start-ups are focused in mobility, e-commerce and other technology verticals. They are creating jobs and contributing to the economy, so much so that they have become the face of new India.”

During the occasion, Deepak Kumar, Executive Director, ITPO, said, “Interactions and interesting and educational sessions here will strengthen and facilitate government and private initiatives related to Digital India and Internet of Things.”

The inaugural session also witnessed the release of a knowledge paper by MarketsandMarkets, titled “Internet of Things: The Next-Gen Revolution in India”. The document offers in-depth analysis of how India is moving towards a digital economy. It also discusses the growth trajectory of India’s telecom sector and explores reasons for increasing mobile and Internet penetration among masses.

“As a privileged partner of Convergence India 2019, MarketsandMarkets is honoured at the opportunity for furthering the event’s value proposition. Drawing from our thousands of deep-researched reports, we will shine the light on the most relevant trends and disruptions prevalent in telecom, media and IoT. We will present crucial insights on the above three, including their current dynamics, in terms of both the market and under-girding technologies; and meticulous prognoses for six years down the line,” said Sachin Garg – Associate Vice President, Emerging Technologies, MarketsandMarkets.