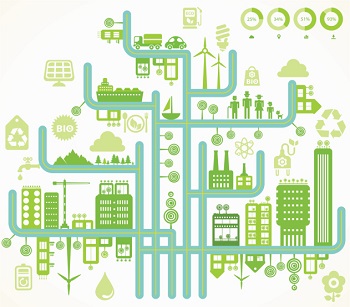 The City deployed a Telensa smart street lighting system in 2016 and saw the potential to use this physical and network infrastructure to roll out additional smart technologies.

The Smart City project is now deployed and Telensa partner sensors, including CA Traffic for traffic analytics, Libelium for air quality and FarSite for waste monitoring, have been installed. The data from these sensors is analysed and combined with existing lighting data and displayed in a smart city dashboard.

This provides custom visualisation of multiple sensors, showing correlations across departments and driving insights for smarter, more efficient and joined up services. Harrisburg is also set to test the use of technology for Traffic Adaptive Lighting, whereby groups of streetlights can be dynamically adjusted in the central management system using real-time, raw traffic data received from a radar-based sensor. This adaptive lighting results in energy savings of up to 30%.

Harrisburg has previously worked with Telensa to deploy over 4,000 connected streetlights spanning the whole city, leading to utility bill reductions of 60-70%. The city realised the additional value of their lighting infrastructure as a platform for smart city sensors, providing a power source and secure cloud connection, and located in citizen-dense areas yet positioned safely out of reach.

Telensa PLANet is an end-to-end intelligent street lighting system, consisting of wireless nodes connecting individual lights, a dedicated network owned by the city and a central management application. The systems pays for itself in reduced energy and maintenance costs, improves quality of service through automatic fault reporting and turns streetlight poles into hubs for smart city sensors. With more than 1.7 million lights connected, Telensa PLANet is the world’s most popular connected streetlight system.

“We’re thrilled to be collaborating again and deepening our relationship with the City of Harrisburg to utilise the connected streetlight infrastructure by adding smart city applications that bring more value to the city,” said Will Gibson, Founder and Chief Commercial Officer at Telensa. “We are excited to showcase the potential of this technology and the benefits it can bring to the citizens of Harrisburg and those of other cities around the world.”

“We live in a data-driven world, but we’re not going to monitor stuff just to monitor it – it has to make sense to the city!” said Wayne S. Martin Esq., Harrisburg’s City Engineer. “That’s why we have chosen these smart city applications to open up endless possibilities for us to improve city efficiency and save money – the dollars can really add up.”

“Use of smart technology to collect data could have profound benefits for the City,” said Mayor Eric Papenfuse. “I look forward to seeing the results of this important test of smart sensors using the lighting network, and hope we can see significant savings and benefits.”