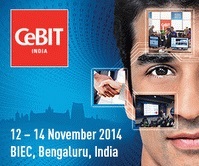 CeBIT India, a leading Business IT and ICT trade fair, organized by Hannover Milano Fairs India in partnership with Bangalore ITE.biz concluded today. The central theme for the day 3 discussions was ‘Smart Cities’ – and centered around how India and Indians can improve every aspect of their daily living – governance, medicine, retail, finance, and work, through technology.

Speaking at the event, Mehul Lanvers-Shah, Managing Director, Hannover Fairs India Pvt Ltd. said, “Day to day living can be enhanced through smart technologies such as M2M communications, Big Data, Mobility and Cloud. A country as vast and diverse as India grapples with many socio-economic problems that can be solved through technology. However, in order to be succesful, the approach taken cannot be the same as that of the West. Today’s discussions were aimed at finding the most suitable path to a ‘Smart City’ for India in collaboration with businesses. ”

Medical Electronics to see growth in the country

Kumud Srinivasan, President, Intel set the stage for the day’s activities with her keynote on ‘Next Era of Technology Advancements for Businesses and Consumers’. She delved deep into some of the different ways by which technology will become the centerpriece of connecting and providing solutions to customers making a specific reference to ingestible and injectable devices.. Speaking about such technology, Ms. Kumud Srinivasan said: “If you look at some of the medical deviecs that exist today, we already have some devices that are going inside our body. It is just a matter of time before these devices become even smaller in dimension. That is something that we can envision happening in a matter of few years.”

A session by well-known Doctor and philanthropist Devi Prasad Shetty, Founder and Chairman, Narayana Hrudalaya followed next. Mr Shetty spoke about the power of technology and medical electronics in enhancing the field of medicine. Mr. Shetty, truly a technology visionary, cited examples from various projects such as the Artificial Heart, iCare (a tool by which a monitor can track a patient’s health), Simulations of real life healthcare situations to train nurses and medical professionals, Bol (an audio messaging device that can help save time for conversations between medical professionals), only to name a few. Speaking at the session, Mr. Shetty said: “We believe that within 5 years, smarter software will make a smarter diagnosis than Doctors. In 10 years, we believe that taking a second opinion from software will be mandatory.”

The India Electronics and Semiconducter Association (IESA) envisions greater growth in the Indian Medical Electronics growth market. According to M.N. Vidyashankar, IAS, President, India Electronics and Semiconducter Association (IESA), “90 per cent of patient cases in India do not require a doctor to be physically present. Local manufacturers who understand the unique dynamics of the Indian healthcare industry are best suited to innovate and develop medical equipment that suit the requirements of developing nations like ours.”

A special panel session was conducted which focussed on ‘The Next Billion Dollar Story in E-Commerce’. The session aimed to get answers of some pressing questions in the retail space from eminent names like Bharath Devanathan-COO Groupon India, Jitender Miglani-Forecast Manager Forrester and Viresh Oberoi- Founder CEO & Managing Director, mJunction Services Limited.

Speaking at the session Jitender Miglani said, “In India around 14% of online population make a purchase online. In China, this is around 50%; in Australia this is around 57%. The online penetration in our country itself is only 16% of India’s entire population. India’s e-commerce industry is at a nascent stage and is expected to cross 36 million online buyers in India by 2014.”

The next panel discussion focussed on Smart Cities and its application in the Indian context. With the government allocating Rs. 7,060 crore for 100 smart cities in the Union Budget, the discussion centered around how the industry can collaborate with the government to support this big and bold initiative. The panellists felt that more than focusing on smart cities, there is a need to focus on a smarter way of planning and governing our cities. Cities need to become smarter in multiple domains across governance, sustainability and improving overall quality of life.

However, Sanchit Gogia, Chief Analyst & CEO, Greyhound Research felt that, “The fundamental problem for the development of truly ‘smart cities’ in India is the fact that there is a broken vision. People do not have the same vision or understanding of smart cities across the government, corporates, regulators, technology bodies and the like.”

PLUGGED IN, the country’s most extensive showcase of consumer electronics and technology, organized by Hannover Milano Fairs India Pvt. Ltd. was launched in the city today. The event showcased the latest digital technology and innovations for end consumers. PLUGGED IN is set to be the ultimate shopping experience for the largest gathering of tech enthusiasts, gamers and consumer electronics buyers who will be present over the 3 days of the show- from 14th-16th November 2014.