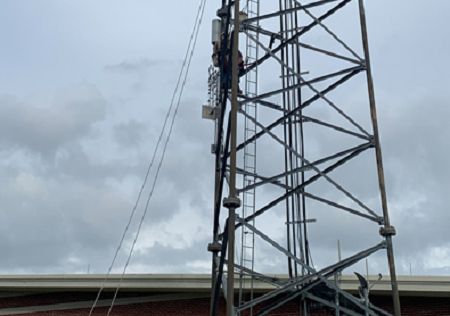 On the eve of the 16th anniversary of Hurricane Katrina’s landfall in Mississippi, C Spire is ready and prepared for Hurricane Ida, which is expected to slam into portions of Louisiana and Mississippi as up to a Category 4 tropical cyclone late Sunday or early Monday.

The diversified telecommunications and technology firm has activated a small cell site to enhance coverage and capacity at the Mississippi Highway Patrol offices on Highway 67 north of Biloxi where officials stage employees and materials and coordinate emergency response efforts.

In addition, the company has mobile communication cell on light trucks and refueling vehicles staged and on standby and has completed precautionary sand-bagging operations at several locations and cell sites in low-lying areas in anticipation of localized flooding and storm water surges.

C Spire technical crews are on call and ready to be deployed to any wireless or fiber facility that experiences service issues or damages from the storm. The company has recently activated a “real time” cell site status notification system for state officials to use in coordinating emergency response efforts.

Hurricane Ida is expected to make landfall in the Mississippi River Delta as a Category 4 storm with winds up to 140 mph and accompanied by torrential rain and life-threatening storm surge. The storm also is expected to cause flash flooding, mudslides and rip currents, bringing up to 16 inches or rain with isolated totals of up to 20 inches in some inland areas.

Mississippi Gov. Tate Reeves is expected to declare a state of emergency later today for several coastal counties and low-lying areas and has warned other parts of the state to be ready for potentially deadly flash flooding. Federal officials are expected to approve the state’s disaster relief request soon. C Spire also is ready to reduce hours or close retail facilities, if necessary, in any storm-affected areas, officials said.

“We’re all praying for the best, but preparing for the worst,” said Alan Jones, Senior Vice President of Engineering and Development for C Spire. “When disaster strikes, people depend on telecommunications as a lifeline. We provide our customers with the best network coverage possible for all of their communications at the time of greatest need.”

Jones said all C Spire employees and contractors, along with an extensive suite of network resources, will be on “high alert” through the weekend and into next week to respond to the potentially killer storm. The firm also is ready to activate its Emergency Response and Crisis Communications plans, which guide the use of company resources and people.

C Spire takes precautionary steps and puts restoration teams through rigorous training and disaster scenarios and masses equipment and materials to protect critical network facilities and cell sites. The firm uses back up batteries and diesel generators at mobile sites and switching centers and plans for loss of commercial power or road closures.

Katrina was one of the worst storms in U.S. history, causing more than 1,800 deaths and $161 billion in damage while unleashing catastrophic floods, storm surge and gale-force winds in coastal and inland areas of Mississippi, Louisiana, Alabama and Florida.

The company is coordinating its emergency response efforts with local (city and county), state and federal agencies, including emergency response lead agencies in Mississippi, Alabama and Tennessee, the Federal Emergency Management Agency, the National Oceanic and Atmospheric Administration, the National Weather Service, the American Red Cross and The Salvation Army.