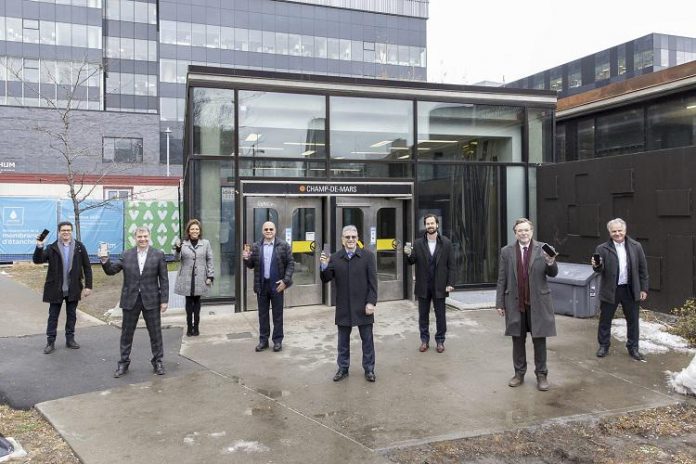 The Société de Transport de Montréal (STM) and its partners—TELUS (as project integrator), Bell, Rogers and Vidéotron—are proud to announce that the deployment of the 4G LTE mobile network is now complete in all 68 stations and 71 km of tunnels that make up Montreal’s metro system.

With the Jolicoeur, Monk and Angrignon stations connected today, this complex project, launched in 2013, has now been completed within its stated schedule, scope and budget, despite the challenges posed by the pandemic.

The project involved an investment of nearly $50 million—funded in equal parts by telecommunications providers Bell, Rogers, TELUS and Vidéotron—and it has provided the STM with Canada’s largest indoor digital network and the longest underground wireless network in the country.

This special collaboration among the country’s largest telecom companies has brought uninterrupted connectivity and stable, 100% LTE coverage throughout the STM stations and trains. STM passengers can now enjoy a download speed of up to 275 Mbps, which is comparable to what they might get at home.

The upgrades required the deployment of radiant cable and antennas in tunnels, the installation of technical cabinets in stations, and the addition of five utility rooms containing specialized equipment and located at key points in the network to ensure optimal coverage.

Through close coordination and meticulous planning, the teams involved managed to complete the project in compliance with all of the key parameters defined for the project. Another fact worth mentioning is that this work was completed with minimal impact on STM commuters and did not require full or partial closures of any stations or entry points, nor did it cause any disruptions to passenger travel.

All of this was achieved despite the inherent challenges of such a complex project and completed in an environment that tens of thousands of people walk through every day, with multiple work sites in progress at any given time.

“I’m very proud to see this innovative, visionary project being completed today for the benefit of the STM and its customers,” exclaimed Michel Lafrance, General Manager of STM subsidiary Transgesco s.e.c., a limited partnership. “With its unique funding model, the partnership between Bell, Rogers, Telus and Vidéotron is the envy of transit corporations around the world.”

“I’d like to salute the hard work and collaboration of our partners—Bell, Rogers, TELUS and Vidéotron—who did a masterful job spearheading this project, together with the STM teams,” added STM Chairman of the Board Philippe Schnobb. “The deployment of the mobile network will greatly improve our customers’ commuting experience, and also enable us to communicate more effectively with them. Today is truly a great day for the Montreal metro system!”

“As project integrator for the design and implementation of the 4G LTE network in the STM metro system, TELUS is proud to have played a role in improving the commuter experience with speeds and underground coverage that are unprecedented in the country,” explained François Gratton, Executive Vice-President, Group President, TELUS and Chair, TELUS Health and TELUS Quebec. “This public transit achievement reflects our ongoing commitment to building stronger, better-connected communities in Montreal and across the country.”

“Bell has kept Montréalers connected since our company was founded here in 1880, and we’re proud to partner in this outstanding communications achievement by the STM,” said Karine Moses, Bell’s Vice Chair, Québec. “We offer our thanks to the STM and all our network partners for their leadership in making Montréal’s underground mobile network one of the most advanced in the entire world.”

“Montrealers want to stay connected when they take the metro, and Rogers is proud to help provide STM users with reliable, consistent wireless service,” said Édith Cloutier, President of Quebec, Rogers Communications and Vice-President, Sales, Enterprise and Public Sector, Quebec and Ottawa. “Commuters can now remain connected to what matters most to them for their whole trip.”

“Vidéotron is so proud of having contributed in the deployment of this one-of-a-kind network,” concluded Jean-François Pruneau, President & CEO, Vidéotron. “From now on, the millions of passengers who take the metro each year will be able to communicate, browse the web and work during their travels. As supporters of a connected life for Quebecers, we want to make people’s lives easier and make technology accessible. This project suits this vision to a T.”