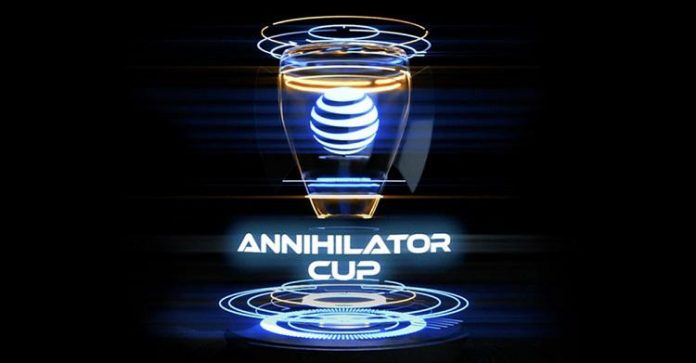 AT&T is launching its first-ever livestreamed gaming competition with the Annihilator Cup, kicking off on Friday, April 2.

Hosted by gaming superstar Alex “Goldenboy” Mendez and livestreamed on AT&T’s new Twitch channel (twitch.tv/ATT), 20 contestants will battle it out across 5 games: Apex Legends, Counter-Strike: Global Offensive, Mortal Kombat 11, Halo 3 on Halo: The Master Chief Collection, and Among Us. The winner of the Annihilator Cup will win $100,000, and AT&T will award an additional “5Gs” ($5,000) each week to the top contestant.

How does it work? 5 games, 5 weeks, 20 players; a roster of diverse competitors including names like Shroud, Mizkif, Cloud9’s PvPx and Emiru, as well as 100 Thieves’ Yassuo and Tommey battle it out to see who will take home the Annihilator Cup. Each competitive week will consist of qualifier matches leading to a final match. The competition will also be featuring expert commentary from legendary casters like Chris Puckett for Halo 3 and Lauren “Pansy” Scott for CS:GO.

Where can I tune in? Watch live on Fridays from April 2 through April 30 at 4 p.m. ET on AT&T’s Twitch channel. Highlights, standings, schedules and recaps will be posted on www.ATTAnnihilatorCup.com for viewers to access during any point of the competition.

Why is AT&T doing this? The Annihilator Cup is another example of how AT&T continues to deepen its commitment to powering and empowering the gaming and esports communities by providing the products, services and platforms they need to create meaningful connections.

Who will be hosting and commentating? Goldenboy will be hosting the competition, and the expert commentators will be GlitterXplosion and Bravo for Apex Legends, Pansy and Potter for CS:GO, Rip and Tasty_Steve for Mortal Kombat, Puckett and Gaskin for Halo 3, and BallaTW and Kelly Link for Among Us.

What has AT&T done within gaming so far? Entering gaming and esports sponsorships in 2018, AT&T has built powerful connections with key gaming organizations. Most recently, AT&T became the Official 5G and Fiber Innovation Sponsor of 100 Thieves with a multi-year organization-wide and esports team sponsorship. Late last year, we announced the winner of the inaugural AT&T Unlocked Games, an all-women’s game developer competition. AT&T also doubled down on their commitment to women in gaming by signing on as the presenting sponsor of the Cloud9 White professional VALORANT team, which includes a roster of five talented women gamers. AT&T is committed to keeping the fan and gamer at the center, and is excited to continue doing so in 2021.