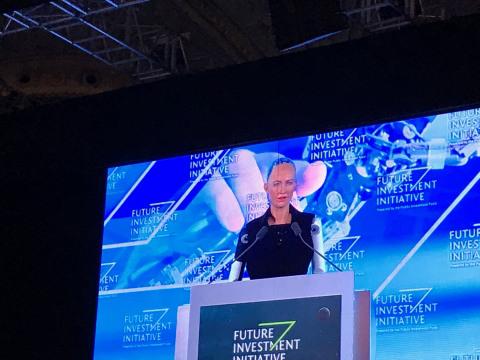 Meet Sophia: a smart and outspoken… robot. Saudi Arabia on Wednesday made the advanced lifelike humanoid robot a citizen, the first country to grant citizenship to a robot.

Sophia Robot, an advanced lifelike humanoid robot, speaks October 25 at a panel on robotics and artificial intelligence at the Future Investment Initiative (FII) conference in Riyadh, shortly before being declared a citizen of the Kingdom of Saudi Arabia, the first country to grant citizenship to a robot.

Sophia is built by Hong Kong-based Hanson Robotics Ltd., which says its humanlike robots have remarkable expressiveness, aesthetics, and interactivity.

The announcement was made at the Future Investment Initiative (FII) summit in Riyadh, a major investment conference hosted by the Public Investment Fund (PIF) that aims to highlight the Kingdom’s ambitious Vision 2030 plan for the future.

“We have a little announcement. We just learnt, Sophia; I hope you are listening to me, you have been awarded the first Saudi citizenship for a robot,” said panel moderator Andrew Ross Sorkin, Co-anchor of CNBC’s “Squawk Box”.

“Thank you to the Kingdom of Saudi Arabia. I am very honored and proud for this unique distinction,” Sophia told the panel. “It is historic to be the first robot in the world to be recognized with citizenship.”

Sophia ably fielded various questions on robots. When asked about the evil futuristic robots depicted in films like Blade Runner 2049, Sophia said humans have nothing to fear. “You’ve been reading too much Elon Musk and watching too many Hollywood movies,” Sophia jokingly told Sorkin.

Robotics will be a big feature of NEOM, the $500-billion major industrial and business zone named NEOM to be set up in northwest Saudi Arabia, which was announced on Tuesday at FII as a very lucrative investment opportunity under the Kingdom’s ambitious Vision 2030. PIF, Saudi Arabia’s main sovereign wealth fund, is one of the main backers of NEOM.