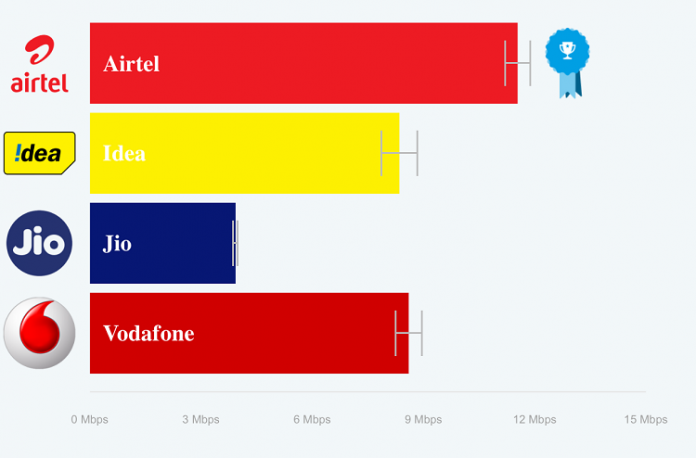 Airtel has beaten all its rivals in terms of delivering the right speeds in India – OpenSignal has revealed this in its first India focused report.

UK-based OpenSignal, the global standard for analysis of mobile experience, has unveiled its State of Mobile Network India report drawing on 1.3 billion datapoints collected from 93,464 users during the period between December 2016 and February 2017.

OpenSignal took its first close look at the dynamics of mobile data in India, comparing the 3G and 4G experience of its Indian smartphone users on the country’s major operators. The report provides a broad perspective on the Telecom situation in India.

For State of Mobile Network: India report, OpenSignal collected data from regular consumer smartphones under conditions of normal usage. In contrast to drive-test data, which attempts to simulate user experience by using a single device to measure network performance in a small number of locations, OpenSignal takes measurements in real time from millions of smartphones owned by people who have downloaded the OpenSignal app.

Those measurements are taken wherever users happen to be, whether indoors or out, in a city or in the countryside, representing performance the way users experience it.

Key findings from the report:
•Airtel tops OpenSignal’s speed rankings
•OpenSignal measured Airtel’s average LTE download speed at 11.5 Mbps, which was 3 Mbps faster than recorded for other operators
•Jio runs away with OpenSignal’s LTE availability award
•4G speeds in India continue to be relatively slow when compared to other countries globally
•Vodafone wins the awards for latency comparisons
•LTE has a good impact in the cities of Delhi, Mumbai, and states of Karnataka & Tamil Nadu which include two of India’s other major economic centres Bengaluru and Chennai.

The findings reveal that Airtel didn’t just win OpenSignal’s 4G speed award, it wound up on top of 3G and overall rankings as well. OpenSignal measured Airtel’s average LTE download speed at 11.5 Mbps, which was 3 Mbps faster than the results measured on its nearest rivals Vodafone and Idea.

The report further reveals that Jio may have only launched LTE in September 2016, but its 4G service appears astonishingly pervasive. OpenSignal’s testers on Jio’s network were able to find a 4G signal 91.6% of the time, an exceptional availability measurement by any global standard. In comparison, no other Indian operator scored higher than 60% in its 4G availability tests.

The study also reveals that Vodafone tops the rankings for the latency on 4G (LTE) connections. Latency, measured in milliseconds, is the delay data experiences as it travels between points in the network. A lower score in this metric is a sign of a more responsive network.

This metric shows the average download speed experienced by a user across all of an operator’s networks. Overall speed doesn’t just factor in 3G and LTE speeds, but also the availability of each network technology. Operators with lower LTE availability tend to have lower overall speeds because their customers spend much more time connected to slower 3G networks.

Brendan Gill, CEO & Co Founder, OpenSignal, said, “We are happy to present our first State of Mobile Networks report for India – one of the most complex mobile markets we have ever studied. Not only is the mobile market extremely large, but it is a highly distributed one. It is a fascinating market that will only continue to get more intriguing. What was a patchwork of different regional operators is now producing a handful of national operators. India is one of the most interesting and dynamic markets for us and we will continue to invest and introduce more analysis for India both through future reports and our blog.”

The full report can be found at : https://opensignal.com/reports/2017/04/india/state-of-the-mobile-network/