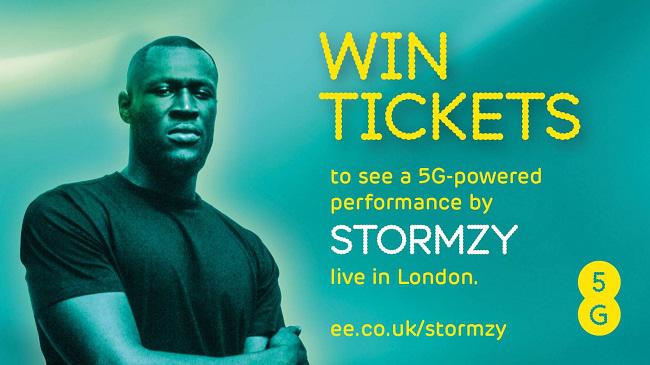 EE will be putting on a 5G-powered gig in London featuring platinum-selling UK artist Stormzy, to celebrate EE making history with the UK’s first 5G service.

The first of its kind show is scheduled for Wednesday 29th May 2019 at a top-secret central London location. The event will take place on the eve of EE’s pioneering 5G network officially switching on in six launch cities: London, Birmingham, Cardiff, Manchester, Edinburgh and Belfast (on Thursday 30th May), offering increased speeds, reliability and connectivity.

Fans can enter into the public ballot for a chance to win a pair of tickets for the one-off sssperformance from the Glastonbury 2019 headliner at EE.co.uk/Stormzy. Further details, including the secret event location, will be revealed to successful ballot entrants shortly before the live date.

The unique event is set to be live streamed over 5G, using the latest developments in mobile and remote production technology from the UK’s first 5G network. The gig will also be presented as a 360-degree VR experience offering fans the chance to get a front row view of the show within select EE stores in the other five launch cities (Birmingham, Cardiff, Manchester, Edinburgh and Belfast).

Fans can expect elements of Stormzy’s own performance to be powered by EE’s state of the art 5G network, creating a show that promises to be an audio-visual spectacle to remember from the South London star whose latest single, Vossi Bop, enjoyed two weeks at the top of the UK charts.

Marc Allera, CEO of BT’s Consumer division, said: “Our 5G network will give EE customers even faster, more reliable connections where they need it most. Next week we will make history, using our network and its unique capabilities to put on a 5G powered gig in London and a 360-degree VR experience for fans in the other five UK launch cities.

“Launching 5G is a huge landmark for EE and what better way for us to mark such a momentous occasion than with the man of the moment Stormzy. We have some huge plans for the 29th and thanks to our 5G live stream show, anyone can tune in and see the action as it unfolds.”

As of Thursday, 30th May 2019, the UK will be able to discover 5G for the first time thanks to EE – voted the UK’s number one network, every year, for five years running.

EE is launching 5G in the busiest parts of the UK, where 5G can really make a difference by providing a more reliable data connection to businesses and consumers. EE expects customers to experience an increase in speeds of around 100-150Mbps even in the busiest areas. Some customers will break the one gigabit-per-second milestone on their 5G smartphones. The fastest speed possible when EE launched 4G in 2012 was just 50Mbps.

In addition to the six launch cities, in 2019 EE will also be introducing 5G across the busiest parts of Bristol, Coventry, Glasgow, Hull, Leeds, Leicester, Liverpool, Newcastle, Nottingham and Sheffield. And in 2020, even more towns and cities will get 5G sites including: Aberdeen, Cambridge, Derby, Gloucester, Peterborough, Plymouth, Portsmouth, Southampton, Worcester and Wolverhampton.

5G is built on top of EE’s award winning 4G network – customers will connect to both 4G and 5G at the same time to get the best possible experience, even in the most crowded areas.

It is EE’s ambition to offer unrivalled choice, with the best content, smartest devices, and the latest technology, through best in class partnerships. As part of this, EE is partnering with some of the world’s leading manufacturers to offer the UK’s largest range of 5G smartphones.

Available across a range of different price points, EE is offering the latest cutting-edge smartphones including Samsung (Galaxy S10 5G) as well as UK exclusives with Oppo (Reno 5G), LG (V50 ThinQ) and One Plus (7 Pro 5G) – providing consumers with unique access to the world of 5G.