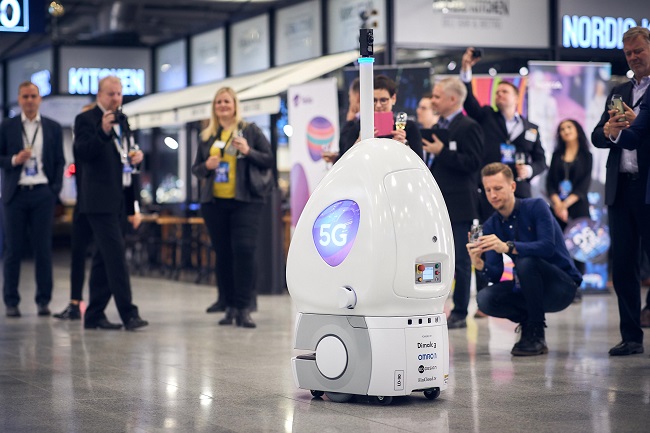 Helsinki Airport has become the first 5G airport in the world as Telia launches a 5G network and together with Finnish airport operator Finavia, introduces a 5G-powered robot project.

Telia is launching a 5G network at the Helsinki Airport and starting a project with airport operator Finavia that explores the possibilites of using 5G in airport operations and bringing new kinds of experiences to passengers. The project means that Finavia will be Telia’s first customer using the pre-commerical 5G network in Finland.

The 5G robot operates in the non-Schengen area of T2 terminal. Telia and Finavia will study how the passengers and the airport personnel react and interact with an autonomous robot carrying out service tasks.

”The robot can deliver real-time video stream from the terminal and enable for example monitoring the terminal area through remote or autonomous control and see that everything is running as it should. The robot can also guide passengers in the terminal, and we aim to try different use cases during the project,” says Heikki Koski, Chief Digital Officer, Finavia.

The data transmission and control of the robot is carried over a 5G base station at the airport. The network, based on technology by Nokia, utilizes the 28 GHz frequency band, the higher frequency band allocated for 5G. This is the first time in Finland that so called millimeter waves are used for 5G in a public use case.

”5G will start with enterprise customers, especially for industrial automation and remote control. The low-latency connection and massive capacity of 5G will serve the airport well with its masses of passengers and data, and with the focus on security and fluency of services”, says 5G Program Director Janne Koistinen, Telia Finland.

The third 5G city for Telia in Finland

Telia opened a pre-commercial 5G network in Helsinki in early September. In November, the company launched 5G in the city of Oulu to support one of the first industrial 5G ecosystems in the world. The city of Vantaa just outside Helsinki where the airport is located is the third 5G city for Telia.