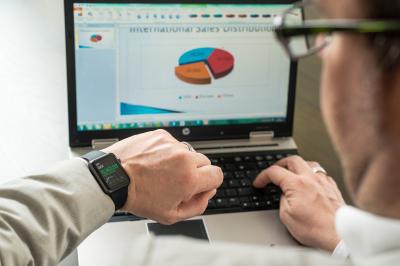 Greater China remains the largest region, contributing 40% of worldwide shipments and grew 60% year-on-year. Americas and EMEA took up another 44% of global volume. Asia Pacific (excluding Greater China) remains the smallest of the four regions, contributing 16%, but was the fastest growing and expanded 130% over Q3 2018 due to strong performances by all vendors.

The September launched Apple Watch Series 5 contributed nearly 60% of its quarterly shipments, driven by new features such as an always-on display and more customization options. Apple has been ramping up production capacity since the end of last year and this allowed the vendor to respond to increasing demand.

Huawei followed in third with 5.9 million units shipped and 243% annual growth. Thanks to its home market, Huawei managed to stay ahead of the recently acquired Fitbit, which followed in fourth. Fitbit faltered in Q3 and was the only vendor in the top five not to grow shipments over last year.

Its September launch provided a much-needed boost, but its acquisition talks were a distraction for the vendor. Samsung rounded out the list, and the recent Galaxy Fit tracker gave it a powerful lift in Asia Pacific.

More importantly, the vendor has done a better job anticipating demand with better supply. Shipments of Series 5 were three and a half times higher than its predecessor Series 4 in the launch quarter in North America. At the same time, the price cuts on the two-year-old Apple Watch Series 3 gave the vendor a boost, when many would have anticipated a price hike on more expensive models due to tariffs,” commented Vincent Thielke, Research Analyst at Canalys.

“Meanwhile, Fitbit has fallen under more pressure amid Apple’s price cuts, despite the newly launched Versa 2, which brought significant improvements in order to remain competitive at the US$200 price point. Fitbit managed flat year-on-year growth, while Samsung, Garmin and Fossil Group all grew double-digits in the wearable band segment.”

“Q3 2019 was the first full quarter of channel fill for Mi Band 4, and Xiaomi’s product enhancements have resonated well with key target audiences. Interestingly, Mi Band started to gain attention from iOS users, which shows there is a broader consumer segment in the region that Xiaomi is trying to appeal to besides its own smartphone users,” said Cynthia Chen, Research Analyst at Canalys. “Most of the Asia Pacific markets recorded triple digit growth while emerging markets in Asia are particularly strong, which is also driven by online promotions during festive seasons.”

EMEA: Xiaomi pushed strongly into Europe to reach a record volume of 2.7 million units, growing 110% year-on-year. Apple came in second during the quarter, driven by the new product launch in September and a strong showing in the UK. Fitbit fell outside the top five league table for the first time in history.

“Fitbit is under pressure from low-cost competitors. As part of Google’s acquisition, Fitbit will pass on hardware expertise and channel knowledge, but Google must work during the interim to keep Fitbit’s brand identity and market share intact as it works to transition the user base over,” commented Ben Stanton, Senior Analyst at Canalys. “In addition to smartphones, Xiaomi brought a broad range of IoT products to Europe, including wearables, smart home and e-scooters. Given the low market entry barriers, wearable bands are particularly important, and Xiaomi has sped up launches and improved channel availability and support. A successful wearable business enhances Xiaomi’s brand image in other smart device segments.”

Greater China: The Chinese markets grew 60% in Q3 led by Xiaomi, which achieved record volume in Mainland China despite losing overall share to Huawei’s 290% regional growth. Apple also grew tremendously on the back of fervent demand for the latest generation of Apple Watch. “Huawei offered various promotional bundles in China on different low-end wearables to improve the appeal of its smartphone offers. But Huawei will face growing challenges to sustain its growth pace with the Watch GT line-up, as it will be forced to come up with new features and stronger use cases that can truly drive upgrades in the long term,” added Cynthia.