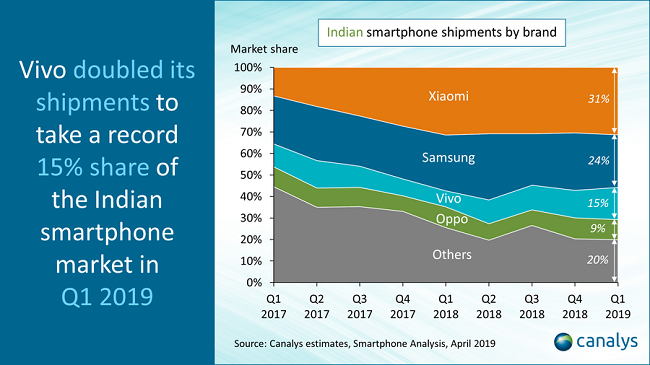 The vendor placed third, taking 15.0% of the market, up from 7.3% a year ago. Xiaomi held onto its lead but grew just 4%, its slowest rate since it entered the market.

Samsung came second for a sixth consecutive quarter and was the only vendor in the top five to see its shipments shrink. Despite Vivo’s performance, the Indian smartphone market was flat, growing by under 2% to 30.1 million units.

“Vivo’s expensive bets on the Indian Premier League (IPL) cricket are paying off,” said Rushabh Doshi, Research Director at Canalys. Vivo paid six times the previous amount to retain title sponsorship of the IPL, touted to be the world’s richest league. “Vivo has made several shrewd marketing investments, which also include signing internationally popular Bollywood actor Aamir Khan as its brand ambassador. But it faces an intense battle in 2019, as Oppo’s Cricket World Cup sponsorship and Samsung’s fresh offensive with the new M series threaten to stifle momentum.”

Realme, an Oppo spin-off, made a surprise appearance on the leaderboard this quarter. Having only been in operation since Q2 last year, the vendor has steadily grown shipments, reaching 1.3 million units in Q1 2019. “Realme’s struggle in 2019, will be the offline channel,” said Doshi. “To win in the offline channel, Realme will need to meet margin expectations, fund retailers to prioritize Realme, and invest in advertisements, banners and brand ambassadors. A mix of these forces is necessary to boost demand for the brand, as well as encourage retailers to stock and sell its phones. But Realme needs to be mindful of the fast-shifting channel landscape in India. Traditionally offline-focused vendors, such as Samsung, are pivoting to online quickly. A quick withdrawal of Samsung from the offline channel will result in accelerated consolidation, adding unwanted risk to channel expansion investments.”