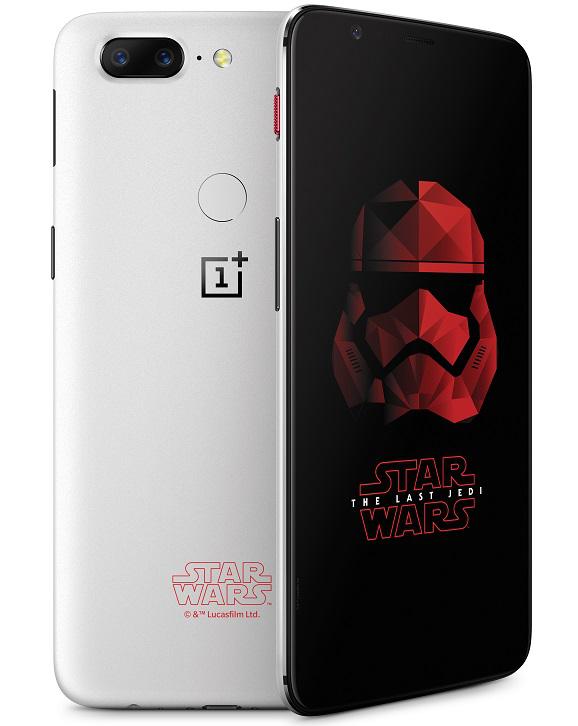 OnePlus, a global mobile technology company, has unveiled its  OnePlus 5T Star Wars Limited Edition in India. This is a special edition premium flagship device ahead of release of the new chapter of the popular space saga, Star Wars: The Last Jedi (releasing on December 15).

The Star Wars edition’s phone design has been inspired by the planet Crait from Star Wars: The Last Jedi. The metal back of the device is painted in Crait white with a precise Star Wars logo in Red printed on the back. Crait is a mineral planet with red sediment under the surface, which is the inspiration behind the red alert slider on the device. Red is, after all, the color of Star Wars traditionally, similar to the alert slider, which has been the long standing feature of OnePlus devices.

On the software front, there is a customized red, white and black theme with a set of 10 exclusive Star Wars wallpapers adapted to the new AMOLED immersive screen and a special Kylo Ren phone case along with a special surprise for Star Wars fans packed in an exquisitely designed gift box as a part of the complete offering.

Speaking on the occasion, Kyle Kiang, Head of Global marketing, OnePlus, said, “Our community has inspired us in more ways than one. Their passion and involvement in the brand and the products since the very beginning has inspired us to come up with product that is superior in every way, from design to the overall experience.

We are excited to join the force and dedicate the exquisitely designed Star Wars Limited Edition to the OnePlus and Star Wars fans in India as a part of the 3-year anniversary celebration. Once again, we’ve worked hard to refine every last detail and we are confident that the Star Wars fans will appreciate the homage that we have paid to the iconic Star Wars saga.”

The Star Wars edition of the OnePlus 5T phone features the highest resolution dual-camera system of 16 and 20 MP sporting f/1.7 aperture on both lenses for better low light photography. It has a large 6″ display with an 18:9 aspect ratio, all while keeping a similar body size as the OnePlus 5.

With Dash Charge, OnePlus’ signature powering technology, the user will always get a day’s power in half an hour. Powered by the most powerful processor, the Qualcomm Snapdragon™ 835 platform, coupled with 8GB of LPDDR4X RAM, the OnePlus 5T can run many apps in the background without a single second of lag, allowing users to switch between apps with ease.

The OnePlus 5T Star Wars Limited Edition will be available with 8GB of RAM and 128 GB storage at Rs. 38,999, starting December 15, 2017 through exclusive online sales partner, Amazon.in as well as on its brand store oneplusstore.in. Customers can also experience and purchase the device across OnePlus Experience stores in Bangalore and Mall of India Noida, while supplies last.

The limited edition variant will also be available in select European countries which includes Finland, Sweden and Denmark.

Users in Kolkata, Hyderabad and Kochi can experience the device at the pop-up stores in these 3 cities. For details on the venue, visit the official website: oneplusstore.in

As a part of the anniversary celebration in India, all OnePlus buyers will be eligible for attractive offers including zero cost EMI, Rs. 2000 extra off on the exchange of any OnePlus device and Rs. 1000 extra off on the exchange of any other device. Additionally, Axis Bank debit and credit cards users are eligible for a Rs. 1,500 instant discount on purchase of any OnePlus device including the 5T Star Wars limited edition. OnePlus users will also be eligible for a complimentary 12-month Accidental Damage Insurance by Servify on downloading the Kotak 811 savings account and activating it with an initial deposit of Rs 1,000 in the introductory period.

Further, there are several other exciting partner offers including Amazon Prime and Kindle. OnePlus 5T Star Wars Limited Edition customers will get 1 TB of data from Idea. Customers are also eligible for 1 year of free membership of Zomato Gold — the newly launched premium subscription offering from Zomato. All anniversary offers are available till 19th December, 2017.