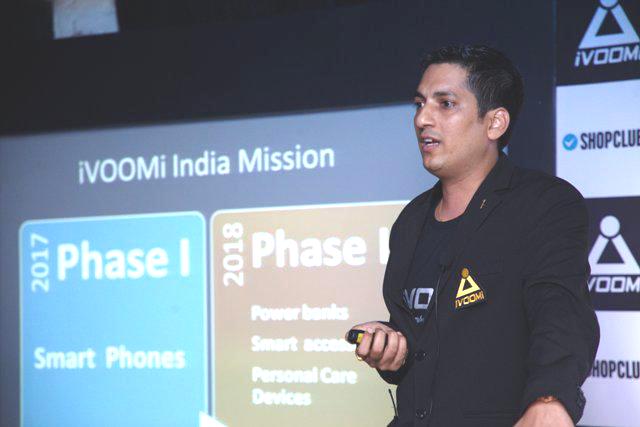 iVOOMi, a Chinese electronic major OEM/ODM has launched two exclusive variants of Smartphones – Me 1and Me 1+ under “ME” series. Prevalent across 30 countries, iVoomi has niche plans for the Indian market.

With a mission to create a product line which are highly advanced in features even in the minimal price range, iVoomi unleashed “ME” series in the mid segment smartphone category with the price range of Rs. 3999/- and Rs. 4999/- respectively. Products can be purchased online on ShopClues.com from 25th April ’17 midnight.

iVOOMi Me 1 and Me 1+ runs on Android Marshmallow 6 operating software further upgradable to Android 7.0. It offers a faster user interface on 5 inch HD IPS, featuring 1280*720 pixels with 2.5D curve glass. The handsets are crafted in curvy and handy design, packed with amazing features in variant colours like Rose Gold and Black.

Commenting on the launch, Ashwin Bhandari, CEO, iVOOMi, India said “We are glad to announce the launch of our new Smartphone series. The “ME” Series is designed to offer next generation experience to the customers. With the launch of this series and having ShopClues.com as the marketplace and our partners to sell our products, we aim to bring unbeatable proposition, price and products in the mid-segment category.”

iVOOMi has tied up with ShopClues, India’s first and largest managed marketplace as a distribution partner for ME Series.

Talking about this association, Radhika Agarwal, Co-founder & Chief Business Officer, ShopClues.com said, “It gives us immense pleasure to partner with the iVOOMi team for their mid-level smartphone range. With the penetration of internet throughout the country and with more and more consumers from tier 2, 3 and beyond cities coming online to shop, it is definitely the right time to launch such a feature-heavy smartphone at a competitive like the ME series. At ShopClues, it has always been our endeavour to fulfil aspirations among the common Indian citizen and we are sure that the smartphone series will receive an even bigger response than the iV505 across the Indian landscape.”

Commenting on the launch, Jessy Liu, Director, Product Marketing iVOOMi India said, “After receiving tremendous response with our first range of smartphones in the market – iV505, today we are delighted to launch yet another exclusive series. Considering the price sensitive aspect of the Indian market, we are working on the world class technology to bring smartphones with advanced features in the minimal price range.

“This is just the beginning and we are not leaving any stone unturned to penetrate all across the length and breadth of the country. We have extensive retail and marketing plans to further propel aggressively.” She further added

The devices are unique in terms of quality of the handset and features. Me 1+ comes with an latest Android Software and advanced battery is one of the key propositions of the products. Unlike other brands in the same segment iVOOMi’s handset are equipped with 3000 mAh battery, comes with the fastest charging methodology which is not prevalent across other brands.