Home 5G How Ecorobotix is preserving biodiversity with 5G 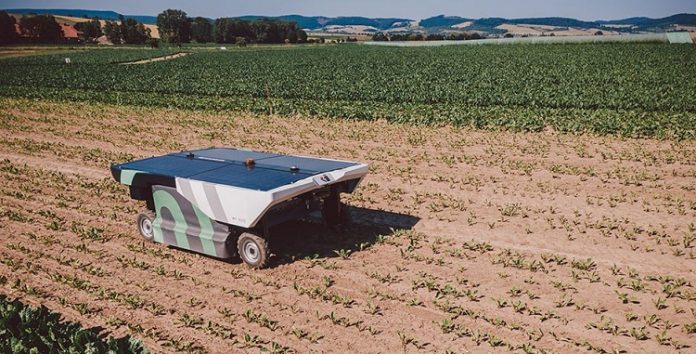 Opinions differ on the use of pesticides because of their potential impact on food. Arguments in favour of protecting the food supply are balanced against justifications for plant protection products to be dispensed with altogether. The trend in society is clear: acceptance for the use of chemicals is falling.

Gamer high-tech, artificial intelligence and mobile telecommunications can massively reduce the quantities used. This is not wishful thinking; it’s the mission of the Ecorobotix start-up from Yverdon.

Ecorobotix specialises in agricultural machinery, which it equips with advanced technology. One of the founders, Steve Tanner, explains it has been a long journey to get to this point: “When we first had the idea for an autonomous device, the market was not yet mature enough.” The start-up began with an autonomous vehicle, which moved around the field driven by solar power. As a concept, it had a lot going for it: reduced soil compaction and clean solar energy, as well as fully autonomous functioning. Founded in 2014, the start-up has won numerous awards for its applications since 2015, including the Swisscom Startup Challenge in 2017.

It was a slow process to bring the technology to the field. Steve Tanner explains: “There was very little acceptance for a fully autonomous machine. Tractors are emotive. It’s a bit like drivers with their cars. Assistance yes; complete takeover, no. For many farmers, the robots would take away what they enjoy doing.” The start-up decided to adapt the robot as an agricultural trailer. Steve Tanner reports: “When our employees came back from their summer holidays in 2020, we explained to them that we were not going to build our ultra-precise spraying technology on a robot, but on the tractor – in the form of a trailer. In just a few weeks, the prototype was designed and built in the company’s own workshop.

Although the trailer was built from scratch, the knowledge for the application was developed by Ecorobotix over a number of years. The trailer combines high-tech graphics chips from the gamer environment, high-performance cameras, computers and a mobile phone connection. Steve Tanner explains: “Our trailer detects weeds in the field and sprays them with pinpoint accuracy as it moves, with a precision of at least eight by three centimetres. Spray nozzles are fitted every four centimetres over a width of around six metres.” Conventionally, a tractor drives across the field and applies the pesticides over the entire field.

To make this work, the six cameras film the field and feed the data into the computer, which in turn uses artificial intelligence to recognize the plant via image recognition. If it identifies a dock or other weed, it gives the command to the nozzle above the weed to spray a metered amount precisely onto the weed, almost in real time.

The machine is continuously improved with regular software updates. The system is now smart enough to recognise plants it has sprayed in the field previously. The Ecorobotix plant detection system is already reducing the use of weedkillers by up to 95 percent because it targets the weeds rather than the crops.

Steve Tanner explains: “This protects the environment. It reduces the chemical residues in our drinking water and in our food. And farmers save money. It also increases the crop yield slightly because the chemicals are harmful to the crops.” Reducing the use of chemicals means healthier plants, which are more resistant to diseases and grow better. So the slight additional yield for the farmer is also an environmental gain.

The focus for further development steps is now real-time networking with mobile telecommunications. Steve Tanner explains: “Our application can even work without a connection. This is fundamental, because there is little or no connection out in the fields in other countries. But mobile telecommunications and especially 5G are helping us to improve the machines and increase precision.” The exchange of real-time data allows Ecorobotix to perform more data analysis, enabling it to show the weed development over time. It also allows the machines to record the health of the plant in terms of growth and fungal or insect control. Steven Tanner sums it up: “5G helps improve the connectivity of our machines, which allows us to improve their efficiency. Efficient machinery reduces the environmental impact of agriculture, which is good news for nature and ultimately for our food.”

Ecorobotix won the Swisscom Startup Challenge in 2017. In 2021, Swisscom Ventures invested in a Series-C round in Ecorobotix. Swisscom is also supporting Ecorobotix with its 5G expertise.